About the Owners – Ron & Janelle Schumacker 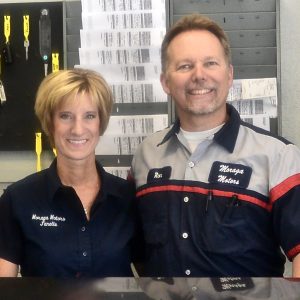 Ron Schumacker, a husband and father of two, grew up in Contra Costa County and has been an automotive technician since 1980. Ron began his career in fleet maintenance working for Pepsi Cola in Benicia, California. With hard work and dedication he eventually managed the entire fleet department. He also met his wife Janelle while working at Pepsi Cola. In 2001, Ron and Janelle took a leap of faith. With both excitement and worry, Ron submitted his letter of resignation to Pepsi Cola. He bought Moraga Motors, an existing automotive repair shop established in 1981, and branched out on his own.

Ron has worked very hard throughout the years to make this automotive repair shop the best. He and his staff pride themselves on being honest and trustworthy and making sure your car gets the best care to keep you and your family safe. Recently, his son Cory has joined the staff as a Technician and is learning the family business.

When Ron is not working, he enjoys spending time with his family. They enjoy boating, dirt bike riding and many other things. 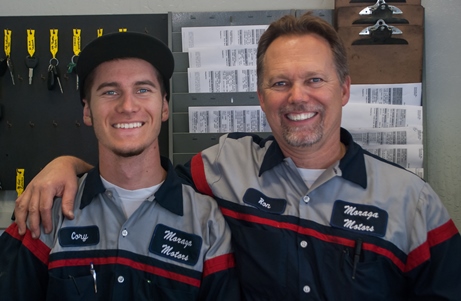 Our membership in the Moraga Chamber of Commerce helps us to facilitate and promote development of a sound business and community group environment in the Town of Moraga.

ASCCA is the largest independent garage owner's association in California. The core purpose of ASCCA is to elevate and unite automotive professionals and give them a voice in a way that promotes integrity, compassion, individuality, and continuous self improvement. ASCCA members strive to provide quality automotive service to their customers. Look for the ASCCA logo sign to determine if your shop is an ASCCA member.

We offer 10% OFF all services to students attending St. Mary's College!